I usually try to avoid politics, but what do you say when the truth is simply covered up and hidden by Big Media, Big Tech and the Deep State just to protect their narrative and disinformation?

There is no justice.

George Floyd is fraudulently called a hero, the Police officer is called a murderer, and is on trial. But wait. Ashli Babbit is fraudulently called a criminal, the Police officer who executed her has been hidden. We don’t even know his name.  He didn’t attempt to arrest her, he didn’t attempt to halt her, his backup stood by and watched him squeeze off a bullet into her chest . . . Nobody knows his name, they’re not releasing the identity, and he won’t be charged.  Is this justice?

There are two completely different stories.

Do all the research you want. We have. Facebook’s independent checkers will call this “partly true” or “without context” or “partly false” … do your diligence.  Both were killed by a police officer.  George Floyd was black, Ashli Babbitt was white.  Where’s the Big Media? Where’s Big Tech?

The Deep State story says  Ashli was attacking the Capital to overturn the government, she was a Qanon follower. Except Qanon doesn’t exist. The police officer claimed he felt his life was threatened as she climbed through the window. She was 5’2″ and weighed 110 and totally unarmed. There were four other officers in the room, all with guns drawn.

The first hand account and the video was provided by an Antifa Officer, John Sullivan. He testified to the FBI that she was climbing up through the window into an area where a number of guns were drawn and pointing at the window, when the shot blew her back out of the window. His first hand deposition given to the FBI has since “disappeared” from the Internet. Our efforts to retrieve that testimony we read shortly after Jan 6 have been unsuccessful.

John Sullivan’s brother identified him from the videos, and testified :

“He’ll go on video and say he’s Antifa and then when approached by somebody he’ll say he’s not,”

I’m not going to even go back over all the sordid details about both killings. That’s what they were  — except George Floyd was black and Ashli is white.

If you believe a band of unarmed families with a few Duck Dynasty radicals and a guy in a deer skin bikini can overtake the United States of America, then you’re either sniffing glue, you’re part of the Deep State, or you’re a moron.   Either way, Ashli was a decorated United States Air Force veteran who was unarmed and in the wrong place at the wrong time.

Read John Sullivan’s account of the execution of Ashli Babbitt 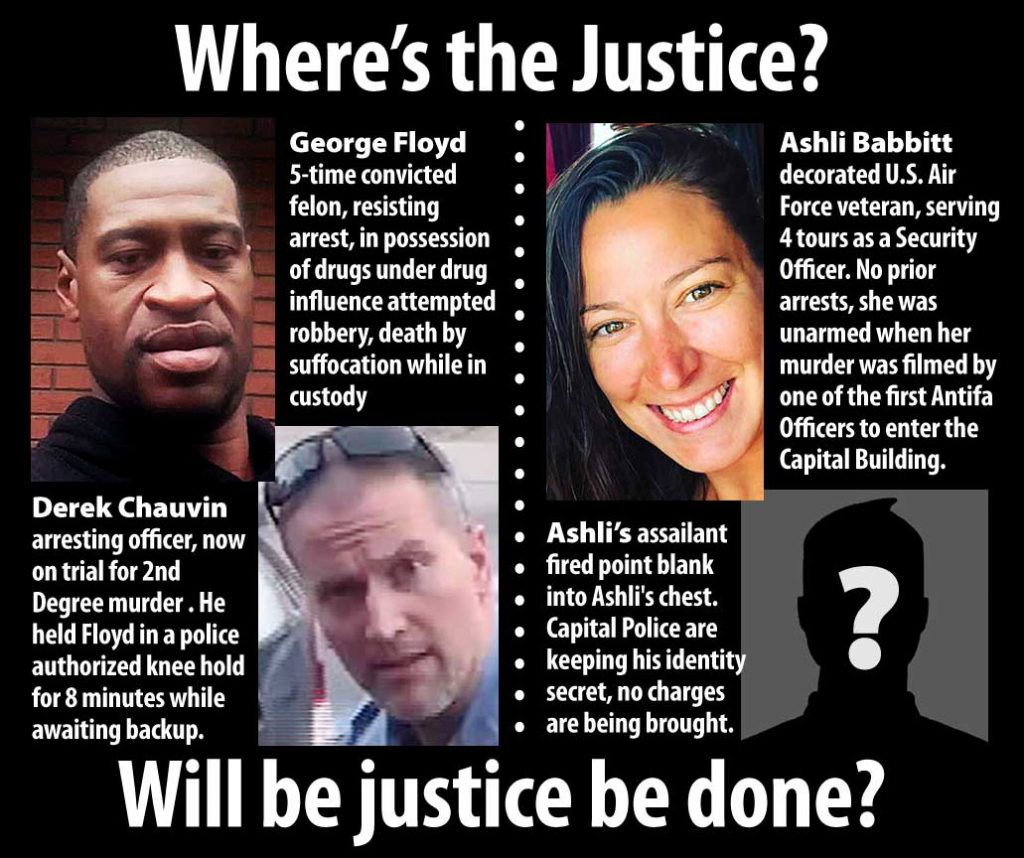